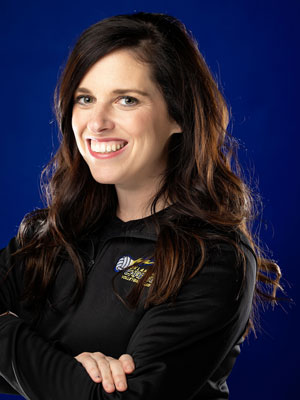 Megan Janda is the Junior Varsity coach for Bishop McGuinness Catholic High School, and is entering her forth season with Charge and as Holly McKamie’s assistant. She is excited to continue coaching alongside Holly.

Megan played club for 10 years in both San Diego, California and Oklahoma City. While living in San Diego, Megan was able to attend elite camps at UC Santa Barbara and University of San Diego.

Megan played libero in both club and high school. She was a 4 year varsity starter, and apart of the 2003 State Champion team at Bishop McGuinness high school. She earned several accolades and recognitions for her play as a libero, including being named a libero of the year for Volleyball Magazine.
Megan decided against scholarship offers and attended University of Central Oklahoma. Since graduation, she worked full time as an Executive Assistant for a local bank. Her and her husband Matthew welcomed their first child in 2016 and was later given the opportunity to work part time, which opened the door  back into volleyball.  She has found a passion for coaching and is excited to continue her journey with Charge!
Megan enjoys playing outside with her husband and two children, vacationing as high up in the mountains as possible, and playing with their 3 doodles.