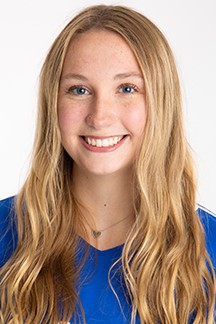 Kenady comes from Baytown, Texas originally where she played volleyball at Barbers Hill High School and Houston Stellar Volleyball Club. She was named First Team All District and Academic Team All District as both a junior and senior. Kenady also received the Dare to Soar award, voted on by her team and coaches which was based off of leadership and character qualities.
In college, Kenady was a four year starter at Middle Hitter while playing for Oklahoma City University. She continued to earn accolades, landing on both All Sooner Athletic Conference Academic and Volleyball teams throughout her career.
While at OCU she coached for Charge as the 13 Regional Head Coach. She has also coached many camps and summer league teams.
“Volleyball is such a big part of my life. I’ve made so many memories and friends throughout my years with club, school and college volleyball. I am extremely passionate about the game, team chemistry, and growth! I’m excited to lead 12 West for Charge!” -Kenady Bertling