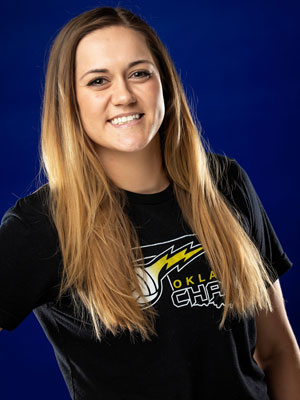 We are excited to announce that Kami Bratcher is our 15 National Head Coach and 10UA Assistant Coach this season! Kami has had tremendous success as a National head coach and UA assistant. This is Kami’s 7th year coaching. Last season her team finished 5th at the OKRVA Regional Championship, qualifying for USAV Nationals were they finished 30th. Under Kami’s guidance in 2020, the 16 National team advanced to the AAU National tournament in Orlando where they finished 30th out of 134 teams. They were also a top 10 ranked team in the OKRVA Region.

Prior to 16 National, Kami was the assistant coach for the 12-UA team. Her team won the OKRVA Regional tournament and qualified for Nationals where they placed in the top 40. Kami has been the Varsity head coach and volleyball director for the Oklahoma City Storm volleyball program in the past. Kami’s team won the Home School national championship in 2019.

During her club volleyball career she received six bids to nationals, as well as placed fifth in the JNVCs in 2011 and third in 2015. Her freshman year of high school she was awarded most valuable player, as well as several all-tournament awards. She was also voted team captain for her freshman, as well as team captain her senior year. Kami received the Husky award for outstanding character freshman through senior year. Her high school team placed second at the 6A tournament in 2013, placed third in the 6A state tournament in 2014, and WON the 6A state championship in 2015.

Kami received a volleyball scholarship to Seminal State in 2016 were she was voted team captain her freshman and sophomore years of junior college. Kami was ranked 17th in the nation on the JNCAA website for her hitting percentage, her freshman year of college and among the top 10 her sophomore year. Kami later transferred to Southwestern Christian University where she was consistently ranked within the top three & five in the NAIA Sooner Athletic conference for her kills per set, digs per set, and hitting percentage. Kami’s volleyball career was cut short after suffering from a torn ACL midway through her junior year and again re-injuring her knee at the start of her senior year.