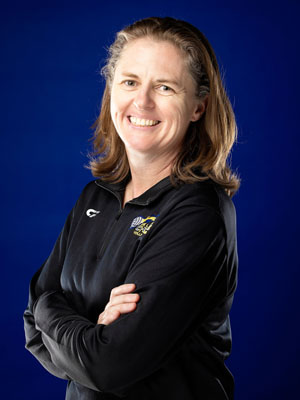 Holly McKamie returns as the 13UA head coach for her 3rd season. Last year her team won the 13 USA MidEast Qualifier in St. Louis, a 7th Place finish in 13 OPEN at Windy City National Qualifier in Chicago and a dominating 1st place performance at the OKRVA Rankings tournament. They finished 13th in the country at USAV Nationals in the 13USA divison in Las Vegas and ranked 35th in the country among all 13’s age divisions. In the covid-shortened 2020 season, Holly’s team was equally excellent. Earning a 5th place finish at Colorado Crossroads, and 1st place at OKRVA Rankings along with top 3 finishes in every other tournament in which they competed.

Holly McKamie is also in her second season as the head coach of the Mid-America Christian volleyball program. In her first season with the Evangels, McKamie guided MACU to its most successful campaign since the program joined the NAIA in 2007. MACU closed out the year with a 19-15 overall record, its most wins since the 2005 season and went 5-5 in Sooner Athletic Conference play. Under McKamie, the Evangels qualified for just their second ever NCCAA National Championship Tournament, earning the No. 3 seed after being selected as the Central Region automatic qualifier. For the first time since moving up to the NCCAA Division I level, the Evangels had two players selected as All-Americans  as well as All-SAC First Team.

Previously, Holly led a phenomenal run as the head of the Oklahoma City Storm, a Christian-based sports organization for home-schooled student-athletes. In her 3 year tenure, Holly led the program to three straight Homeschool National Championships. The Storm won the 16’s Division in 2017, the Class 4A championship in 2018 and the Undisputed Home School National Championship in 2019.
For the past 11 years she has coached both high school and club for boys and girls. Coaching every age group from 13’s through college has provided her with a strong understanding of the game.
For 12 years, she officiated high school and college volleyball and now mentors other officials and her own children in their officiating careers.
In 1998, Holly graduated with honors with a degree in Physical Education at Oklahoma Wesleyan University. She played volleyball there and was the starting setter for 4 years. She also played basketball for 4 years and was the starting shooting guard for 3 years. During her time at OKWU, she received numerous awards, and competed in 3 NCCAA National Championships.