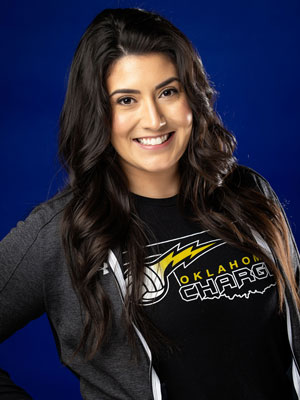 Steph Kane is in her 12th season with Oklahoma Charge. Her 2022 team once again won the OKRVA Regional Championship and qualified for USAV Nationals in Indianapolis. At Show Me in 2022 her team finished 5th in 15USA as well as a Top 10 finish at the MidEast National Qualifier.

In 2021, her team also won the Regional title and qualified for Nationals in Las Vegas where they finished in the top 30. Playing Open at the President’s Day Tournament in Omaha, 15UA finished 5th. They also finished 9th at Windy City in 15 USA and competed well at the Open level at two other National Qualifiers. She once again had a setter named to the USAV National Training Program when Liv Ward was selected as one of only 4 setters from across the United States. Her 15UA teams had a twp year stretch where they did not lose to an Oklahoma region 15s team.

Last fall Steph returned to her alma mater, Jenks High School, as an assistant coach where they were the 2021 6A State Champions. While a player at Jenks, Steph was a team captain and setter for their State Championship team. Steph is also the past head coach at Norman North High School. After assisting for 2 years, Kane took over as the head coach in 2013 and quickly took the program to new heights. Norman North was one of the top ranked teams in Class 6A under her leadership. Her teams consecutively hosted regionals and made 6A State Championship Tournament appearances from 2014 to 2020. In 2015 & 2016, the Timberwolves made it to the finals. She was awarded the 2014, 2015 and 2016 Oklahoma Volleyball Coaches Association Regional Coach of the Year. In 2017, she was selected as the Oklahoma All State Big West Coach. Kane also received the Norman North Coach of the Year award in 2018.

Steph continues to be an active player in several volleyball leagues and representing Oklahoma at the USA Adult Nationals. When she has free time outside of volleyball, she enjoys attending OU football games and hanging with friends and family.

Steph is very excited to begin Charge East and growing the game in the Tulsa area.