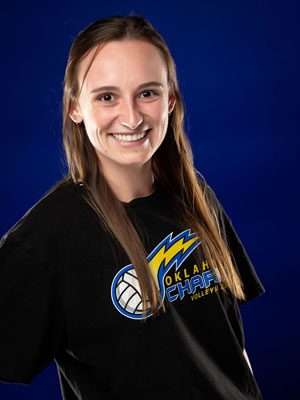 Mandy loves coaching volleyball just as much as she loved playing it, if not more. She is an elementary teacher and the head high school volleyball coach at Blanchard Public Schools. She was named the 2021 Regional Coach of the Year. Mandy has been coaching for 7 years and has coached high school for 3 of those years at Putnam City North and Mount St. Mary’s. Last year Mandy was the assistant coach for the Charge 16 National team that finished Top 30 at AAU Nationals in Orlando and Top 10 in the OKRVA Region.

Mandy graduated high school from Mount St. Mary’s and was on their first state winning volleyball team in 2013 In 2014 they were the state runner ups. Mandy received numerous MVP titles and was nominated for too many all tournament teams to list. In 2015 she was named to the All State West team and played in the All State Games.

After high school, Mandy received a scholarship to play at Oklahoma City University where she was an outside hitter. They placed top 10 in the nation in 2016 and 2017. At the end of the 2017 season Mandy ended her volleyball career and transferred to the University of Central Oklahoma where she graduated with a Bachelor’s degree in exercise science and fitness management with the hopes of becoming a coach someday.

Mandy has also worked as a strength and conditioning coach and personal trainer after graduating college. She is really looking forward to another year of coaching for Charge!