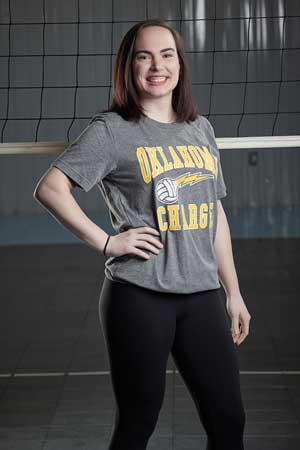 Coach Maegan, originally from Rowlett, TX, has played volleyball since she was in the 3rd grade. She played volleyball at Lakeview Centennial High School in Garland, TX where she played DS/Libero on Varsity for 4 years. She also played club for 5 years at some of the top clubs in North Texas including Skyline and Excel.
College volleyball brought her to Oklahoma where she played her freshman year at Randall University in Moore, OK as libero where she led her team to a 1st place win at Regionals and 3rd place finish at Nationals. Here she earned First Team All Conference. She then transferred to Mid-America Christian University where she wrapped up a stellar career with a runner up finish in the NCCAA National Championship. In her last season, she helped lead her team to a record breaking 30-9 for the season beating several nationally ranked teams. She completed her Bachelor’s degree in Business Administration and Sports Management and is currently pursuing her Master’s in Business Administration and Managerial Accounting. So far at MACU Maegan has achieved many great successes including All-SAC First Team, All-SAC Second Team, SAC Scholar-Athlete, NCCAA All-American Second Team, NAIA All-America Honorable Mention, NAIA Defensive Player of the Week, 1st in Single Season Digs in MACU History, and 1st in Career Digs in MACU history.
Coach Maegan began coaching club in 2018 where she assistant coached 16 Silver at OK Premier. She then coached the 14’s team at OK Dynamite in 2019 where her team finished 22nd in the Region out of 63 teams. In 2020, Coach Maegan coached the 15-2s team at OKC Heat. Coach Maegan is also now the Varsity Assistant Coach at Norman High School this year! This will be her second year at Charge as the head coach of the 16-2 South team and she is ecstatic for to assists her best friend and 16-2 assistant on the 14-2 South team. Go Charge!!