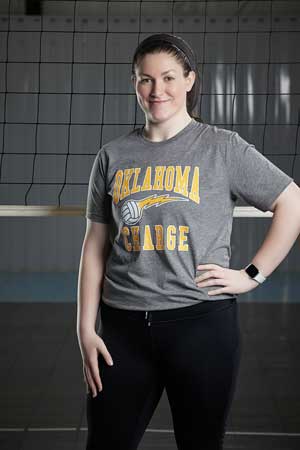 Coach Maddie, originally from Tulsa, OK, has played volleyball since she was in the 4th grade. She played volleyball at Cascia Hall  Preparatory School and Jenks High School for her 4 years. She also played club for 5 years at Club One and Ultimate Performance in Tulsa, OK.

College volleyball brought her to Oklahoma City where she is still playing today at Mid-America Christian University as a Right Side Hitter. Maddie has also filled other hitting positions such as Outside and Middle Blocker due to team injuries during her Sophomore season at MACU. While attending MACU, she has achieved SAC Scholar Athlete and Academic All-Conference during MACU’s recording breaking seasons.

As Maddie continues to play volleyball for MACU, she is pursuing a Mathematics Degree and plans to works towards her Masters in the near future. This will be her second season coaching with Charge South and this year she adds 14-2 Head Coaching responsibilities to her 16-2 assisting. She is really excited to be coaching at Charge with Coach Maegan and is ready for this season!