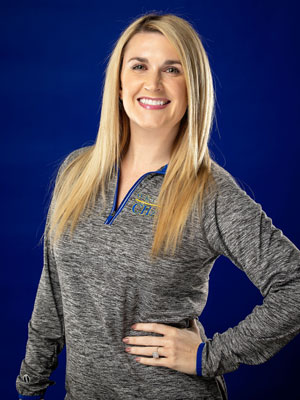 This will be Jessica’s 12th season coaching club volleyball for OK Charge, and 10th season as Head Coach of the 17 National team. Her last five teams finished in the top 10 at OKRVA Regionals and four teams placed in the top 5. Under Jessica’s guidance our 17 National team has consistently been the top 2s team in Oklahoma.  She was also the Varsity Asst Volleyball Coach at Heritage Hall for 8 years helping lead them to 3 State Championships and 2 State Runner-Up Titles. She has been involved in the volleyball world for the past 24 years either as a player or a coach.

Jessica played club volleyball for a number of different clubs from age 12-18. She graduated from Heritage Hall in 2004 and was a starter on the Varsity Volleyball team all 4 years and helped them earn 4 State Runner-Up Titles. She was also an avid tennis player, winning 3 Individual State Championships and 3 Team State Championships. She was named to the Tennis and Volleyball All-State Teams in 2004.

After high school, Jessica attended Oklahoma State University, where she graduated with a double major in Marketing and Business Management. While in college, she coached 9th grade volleyball at Stillwater High School.

She currently works in Technology Sales and lives in Edmond with her Husband, Daughter, and 3 dogs.