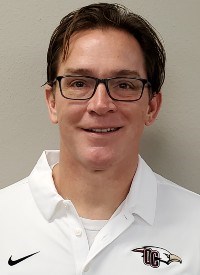 Charge is thrilled to welcome Division II veteran Jason Skoch to our coaching staff. Coach Skoch has amassed over 400 wins in his college coaching career. He is the only Division II coach to have led 3 different teams to NCAA Elite Eight appearances. He has six Elite Eight appearances so far. Coach Skoch will take over as the Charge 18UA Head Coach in 2021-22. He also has taken the reins as the Head Coach at Oklahoma Christian University as they continue to get their program up and running. He is excited to be joining the Charge coaching staff full time this season and eager to help college bound athletes reach their goals.

In his 15 years as a head coach Skoch, a five-time conference coach of the year, has put together a .783-winning percentage with a record of 437-121, including a 276-88 mark in 10-years at West Texas A&M. He has guided his programs to nine 30-plus win seasons while earning 13 conference titles and 12 NCAA postseason appearances with six NCAA Elite Eight appearances.

Skoch picked up his 400th coaching win on Sept. 8, 2018 against MSU Texas, in sweeping fashion. He has guided 68 all-conference players and 34 all-Americans at Truman State and West Texas A&M.

At West Texas, Skoch captured five Lone Star Conference Championships and made seven NCAA Regional appearances including three trips to the NCAA Elite Eight. He was a four-time LSC Coach of the Year and helped the Lady Buffs set the record for the longest conference winning streak in Division II history at 87-straight matches which started in 2006, three years before he took over the program, and lasted until Sept. 17, 2011.

In his four seasons at Truman State, he compiled a 137-22 record (.861), made four consecutive trips to the NCAA Tournament, developed 11 All-America student-athletes as well as two MIAA Most Valuable Players. The Bulldogs were MIAA regular season and tournament champions in both 2006 and 2007, and spent a portion of the 2005 campaign ranked number one in the national polls. Additionally, the Bulldogs were ranked in the AVCA Division II Top 25 Poll every week during his tenure as head coach. While still at Truman, Skoch recruited the 2009 AVCA National Freshman of the Year, Megan Sharpe.

In 2007, Skoch’s squad set season records in kills, hitting attempts, assists, digs and blocks en route to a 36-6 overall record, an MIAA tournament title, a No. 1 seed in the South Central Regional, and a trip to regional championship match. The 36 wins were the second-most in program history, as the team won the MIAA East division for the second-straight season.

Skoch has demonstrated success from the outset of his Truman tenure, as in his first season at the helm, Truman finished second in MIAA play and won the MIAA postseason tournament. After opening the season ranked second in the preseason national poll, the squad jumped up to No. 1 one week later for the first time in school history. They held the top spot for six weeks in 2005.

He capped off his first season at the institution with a South Central regional title before falling in the Elite Eight against host and national-No. 1 Nebraska-Kearney.

A former club volleyball player at Penn State University, University of Memphis and Oklahoma State University, Skoch earned a Bachelor of Science degree from Oklahoma State in 1998, with a major in statistics and a minor in mathematics. The Yukon, Okla. native, Skoch went on to earn his Master of Science in statistics from Penn State in 2001. Skoch started his coaching career as the 9th grade coach at Stillwater Junior High, working with Ryan Webber, Charge’s Director of Coaching.

Jason and his wife, Karen, have three sons, Jay, Kyle and Kade, and one daughter, Emmie.