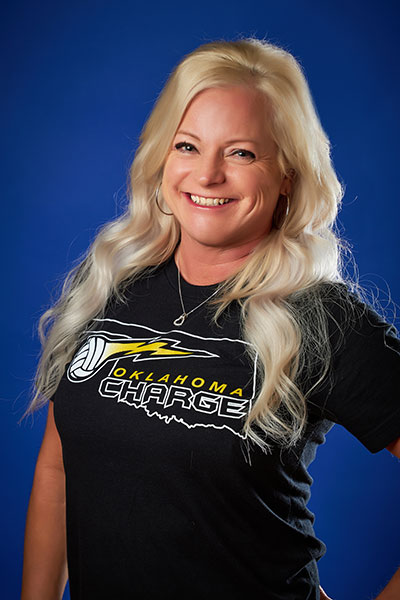 Janet Brannon has coached, officiated, and/or played in the Oklahoma metro area for the past 25 + years.  She has coached her 11UA team to winning six straight OKRVA championships in 2017, 2018, 2019, ranking first during the 2020 season, 2021, and most recently 2022.  In 2022 her 11-UA team won the OKRVA Regional Tournament, had a player named Regional Tournament MVP and qualified for USAV Junior Nationals in Indianapolis where they finished 13th out of the 48 teams in the top division.

This year she will move to the Head Coach with the 12-Under Armour team. Janet is also the Director of Coaching for the South teams.  She is also the founder of All American Sports, which focuses on camps and clinics for youth volleyball.

She started playing volleyball in the Edmond school system at the age of eleven. She has been a member of USA Volleyball since 1991 playing women’s club volleyball.  She is IMPACT and CAP I certified with USA volleyball as well as a certified referee and scorekeeper.  She has coached youth club volleyball since 2004.  In February 2008, she began a youth league in Moore, OK.  Shortly thereafter in April 2008 she was hired as the head volleyball coach at Southmoore High School and responsible for the junior high volleyball program as well.  In her first year at Southmoore, the program’s record was 2-22.  Each year the program records have improved.  In 2013, she led Southmoore varsity to win their first OSSAA Regional tournament thus being the first Moore district school to ever advance to OSSAA State Tournament.  She was selected OCA Region 5 Coach of the Year in 2010 and 2014.  She was selected as the 2014 OCA Large West All State coach and led the team to defeat Large East in a dominating victory 3-0. She retired from coaching High School volleyball in the spring of 2019.

In 2008 she founded OESA starting with one team.  She was the executive director of OESA from 2008-2015.   In the 2012 club volleyball season, she was the Head coach of Oklahoma Edge 12-1 team that won the Oklahoma Regional Volleyball tournament and the bid to attend the USA Girl’s National Championship tournament in Atlanta, GA.  She has coached teams in many AAU and USAV National Tournaments.