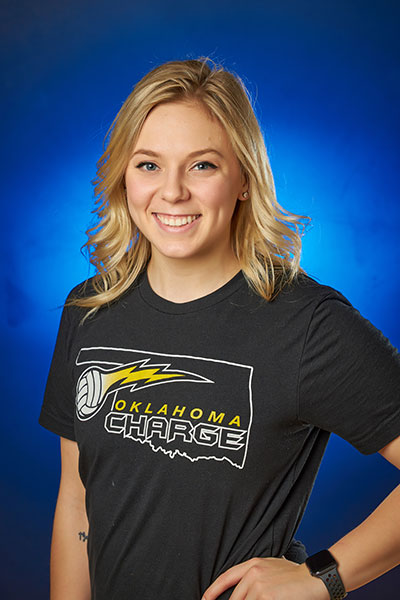 Hanna is entering her fifth year of coaching with Charge, and her sixth year coaching club ball overall. Hanna is the Assistant Coach and Recruiting Coordinator for Mid-America Christian University and will be the 15 National assistant coach for Charge in 2022-23. Last season Hanna was the head coach for 14 American where she led her team to an 8th place finish at the OKRVA Regional Tournament and a solid finish at the AAU National Championships.
In 2021 Hanna assisted with the 14 American team as time allowed. She was finishing her college playing career at Oklahoma City University and Covid moved her season over the top of the spring club season.
Previously Hanna got her first taste of coaching while still playing for Columbia College in Missouri. While there she was the head coach for Performance VBC out of Jefferson City, MO. When she transferred to OCU to play in 2018, she joined the Charge coaching staff and has been with Charge ever since. As a coach, Hanna looks to improve girls not only in their volleyball abilities, but also working with them to build strong leaders and help in more than just volleyball.
As a player, Hanna graduated from Choctaw High School in 2016 where she holds the record for the most aces in a season with 95 aces, and was named Big 10 All Conference her senior year. She earned all-tournament honors twice as well. She also spent all 5 years of club playing for Charge and knows first hand that Charge has a true culture to build amazing volleyball players, and even stronger women.
After high school, Hanna spent two years at the National Championship program Columbia College in Columbia, MO and saw nationals both years. Her freshman year they finished top 10 in the country. In August of 2018, she transferred home to play at Oklahoma City University. While there, the team appeared at nationals in both 2018 and 2019, finishing top 16 in 2019.
Throughout her years of volleyball, Hanna has been trained in every position and has been given opportunity to gain knowledge to help grow each individual that she gets the chance to work with. She hopes to help train young women to be leaders on and off the court and see them succeed in every aspect.