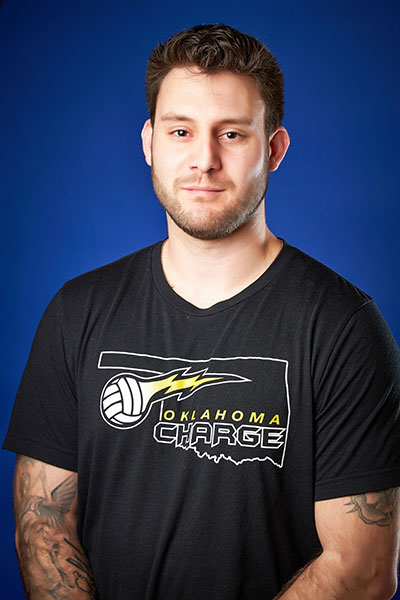 Derek returns for he’s seventh season with Charge, this time as the 15 Under Armour East coach. He is back in the 6A realm being appointed the new Head Coach at Bixby High School. Derek has coaching stops throughout the OKC metro area as well as the Tulsa area that include:

Although his athletic career was played out as a football player, he is no stranger to the game of volleyball. Derek played on one of the only boys volleyball teams in the state of Oklahoma, at the time, in the 1997-1999 seasons laying the foundation of what Oklahoma Kaizen boys volleyball looks like today. Derek took the opportunity to show off his amazing athletic ability by playing and competing at high levels in basketball, baseball, track, and football. Even through all of this he found time to learn and play the game of volleyball with his mother Coach Janet Brannon, 11UA Head Coach with an uncontested regionals run 7 years straight and former Southmoore high school coach and the only coach to take the Sabercats to State. He also had the ability to learn, play, and work with his siblings Nick Serowski, current Assistant Coach at the University of North Texas, Amy Serowski, current Southmoore and 12UA Head Coach, Tanner Serowski, current Assistant Coach at Newman Univeristy, Kayla Brannon, current Eastland (TX) high school Head Coach, and Megan Serowski, currently 16UA Assistant Coach.