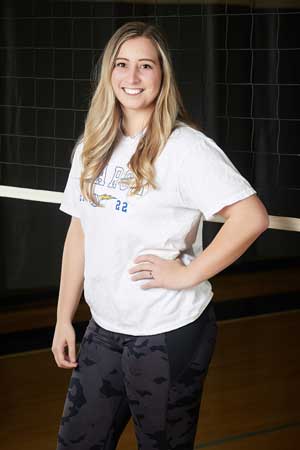 Amy returns in 2022-23 as the 13-1 South Head Coach after two terrific seasons as the 12UA Head Coach. Last year the 12UA team finished Top 4 in OKRVA and 5th in 12 Club at AAU Nationals in Orlando. This followed her 2020-21 season where her 12UA team finished 2nd in the Region and qualified for USAV Nationals in Las Vegas. The team opted to attend the AAU National Championships where they also finished 5th.

Amy is also the Head Coach at Southmoore High School. She took over the program in the 2021 season. Amy attended Southmoore from 2010-2014 where she earned many accolades including All State, a bid to the State tournament, and many all tournament teams/MVP’s. She loves the program and loves the direction the program is going in.

After graduating high school, Amy attended King University in Bristol, Tennessee on a volleyball scholarship. She started three of her four years, was captain for two years, and earned Third-Team All Conference three years in a row. She was also ranked 5th in the nation for aces per set. Amy started coaching club as an assistant as an 18U athlete, but started coaching her own teams in Tennessee during college.

After graduating from King, Amy started pursuing her coaching career further. She moved to Hickory, North Carolina to be an assistant coach at Lenoir-Rhyne University. At LR, Serowski helped move the team up 5 spots in the conference during her first year. She also had two All-American athletes during her two years in North Carolina.